​Farmer Owned and Operated
With roots growing back to the early pioneers who cleared the land to grow fruit, corn, wheat and yes... hops, our founding partners come from a long line of Oregon farmers. The Coleman family landed in the Willamette Valley in 1849 and soon purchased a plot of land to farm near McMinnville. After pocketing a little change from the California Gold Rush, the family purchased land near St. Paul and from there spread across the valley and up the Columbia Gorge in the following century. Cousins can be found all over the Pacific Northwest with ties to prominent hop farms including Coleman Hop Farm, 3D Farm / BC Hop Farms among others. Craig Coleman, our managing partner, grows a variety of crops in the Columbia Plateau including blueberries that can be found in our Bloops beer. Our roots run deep in hops and in Oregon, which is why you can visit and explore our beers both at the brewery in Boardman, or our taproom in Wilsonville.

​The Modern Era
Today, Ordnance Brewing is an outlier, a brewery out past the far edges of Pacific Northwest population centers, far from the region's corporate breweries and dense brewer communities - smack dab in the middle of a beer desert.  As such, there are no predetermined expectations, no unspoken rules or formulas to be accountable to. It’s the freedom found in the wide-open spaces of the Columbia Plateau and expansive farmland. In this remoteness, we brew freely, with an innovative spirit, a farmer’s work ethic, the creativity of someone living off the land and a vision to make beauty out of little. The owners, brewer and brewery itself are on the fringe, uninhibited, driven to work together for a unified mission: Brew distinct, honest and simply enjoyable beer.

Our namesake is now a ghost town, a collection of decaying offices, a theater and school standing in scattered ruins on Craig Coleman's farm. A water tower still stands tall above this once bustling community. It was here, generations ago, that people came from all over the country for the common good. Here, everyday citizens did their part to set aside their differences and support a growing war effort in the Pacific and Europe during World War II. To these noble people, to our ancestors, we raise our glass and carry forward the name Ordnance.

Find us on draft at your local tap room or visit us at our three locations to experience the full range of our brews.
​ 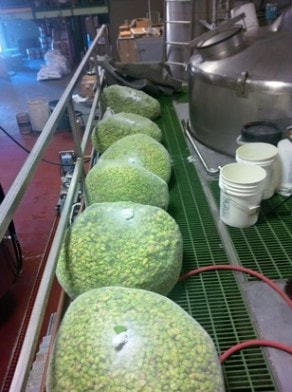